“Here in Saint-Emilion at Angélus on our ancestors’ land, vines and wine are like a religion, a passion shared by the whole family.”

Located in the heart of Saint-Emilion, Château Angélus is a designated Premier grand cru classé (A) estate on Bordeaux’s Right Bank. The property has been owned and operated by the Boüard de Laforest for over 240 years, though the family’s impressive regional roots date back to 1544. The estate’s viticultural legacy began in the early 20th century, when Maurice de Boüard de Laforest inherited the property and annexed it to include a 3-hectare parcel of vines called Clos de l’Angélus. The name Angélus pays homage to the three neighbouring Saint-Emilion churches whose bells can be heard at the same time amongst the plot’s eponymous vines.

In 1954, the first classification of Saint-Emilion wines was established, though Château Angélus was already a designated Grand Cru Classé. About 30 years later, family member and oenologist Hubert de Boüard de Laforest pushed the winery’s long-standing past into the future through pioneering innovative policies in both the vineyard and the cellar. As of 2012, the estate is under the direction of his daughter, eighth-generation Stéphanie de Boüard-Rivoal who continue to honor the family’s devotion to producing excellent wines from world-class vines on Bordeaux’s Right Bank. She is the third woman in the estate’s history to oversee operations.

The location of Château Angélus is quite unique for Bordeaux, as it sits in a natural amphitheater. The estate’s vines flourish on gentle hillside vineyards, which benefit from natural drainage due to their slopeside location. Soils are dominated by clay and limestone, which create the ideal home for cultivating Merlot, which comprise approximately 53% and Cabernet Franc 46% of the estate’s 27 hectares, respectively.The signature high percentage of Cabernet Franc found in Angélus’ Grand Vin adds a wonderful freshness and purity to the luscious and creamy flavor profile created by its Merlot base.

Today, Château Angelus remains one of the most highly respected wineries in all of Bordeaux. The winery is regarded for its timeless excellence, commitment to high-quality wine production. The family’s commitment to tradition yet seamless integration of technology and innovation ensures that the very best is revealed during each vintage produced at their hands. 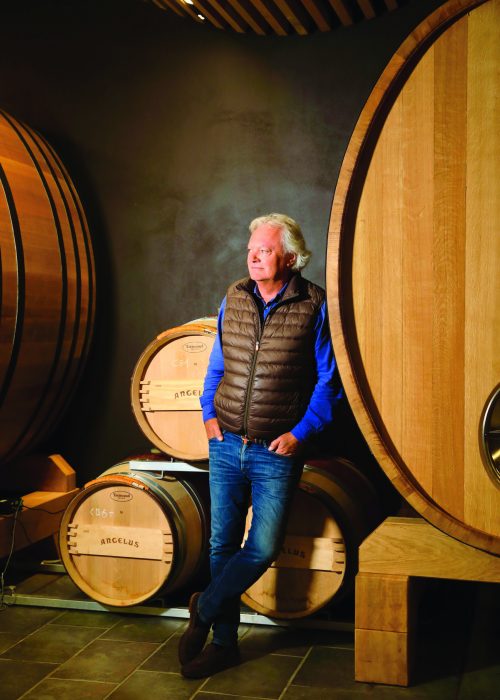