“We use the old vines to make the Brunello di Montalcino Riserva which is only produced in very good vintages. Since the first vintage in 1888 of the production of Brunello, the Riserva has been produced only 40 times.”

Biondi-Santi is one of Tuscany’s most iconic producers. Situated in the heart of Montalcino, the estate comprises 25 hectares of vines, all of which are dedicated to the region’s signature grape, Sangiovese. Biondi-Santi’s cellar, Tenuta Greppo, is located at soaring altitudes of 1,850 feet above sea level, where the original family still produces world-class wine stoday.

Historically, the Biondi-Santi name plays a huge role in the region’s history – in fact, the appellation of Brunello di Montalcino likely wouldn’t exist without it. The first mention of Brunello dates back to 1867, when Clemente Santi first brought his red “scelto” wine to the Universal Exposition in Paris. Santi’s barrel-aging techniques and focus on ageworthy wines were quite revolutionary for the time. Two generations later, Ferruccio Biondi carried on the legacy of his grandfather and continued to make pioneering advances in both the vineyard and the cellar. He chose to hyphenate their last names and created the Biondi-Santi entity.

After Ferruccio’s passing, his son Tancredi, then followed by his grandson Franco, continued to bring numerous advancements to the estate. By 1966, Brunello di Montalcino had officially become a recognized DOC in Italy, much in part due to the work of the Biondi-Santi family. By 1980, its status was elevated to DOCG, making it the first appellation in all of Italy to obtain this prestigious status. Franco’s son and grandson, Jacopo and Tancredi, represent the sixth and seventh generations at the estate. As of recently, the estate has been acquired by the French group EPI, a company that shares the same core values and puts the same emphasis on regional tradition as the original Biondi-Santi family members. Today, all operations are overseen by Giampiero Bertolini in conjunction with Federico Radi, the estate’s Head winemaker who has worked alongside the original family since his first days at the winery.

In the vineyard, Biondi-Santi generally harvests their fruit much earlier than neighboring wineries. Once in the cellar, grapes undergo a long maceration and ferment in cement tanks with native yeasts. As is the protocol in Montalcino, Biondi-Santi’s Brunellos age for a minimum of 36 months in large Slavonian casks. Their entry-level Rosso di Montalcino rests only for one year.

Biondi-Santi wines are known for their profound aromatics and savory flavor profiles, marked by notes of bright cherries and peppery spice. Zesty acidity and well-integrated tannins create solid backbones in the wines, which ensure long lives in the cellar. Riserva wines are only made during the best years (and generally show their best with at least a decade of age on them). These remarkable bottles represent a piece of Tuscan winemaking history and merit a place in any reputable cellar. 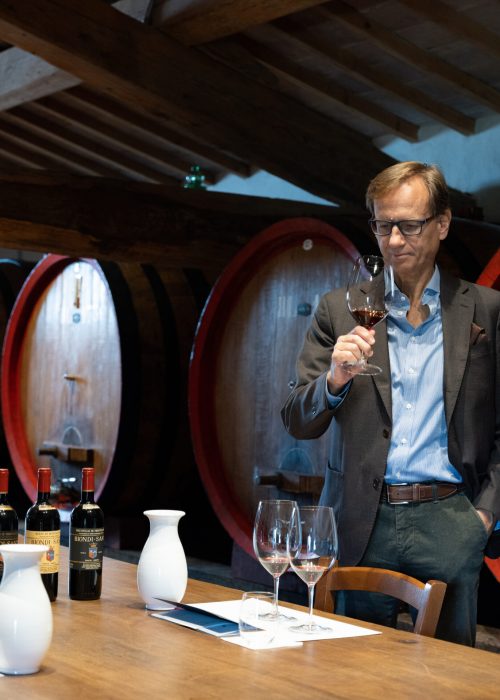